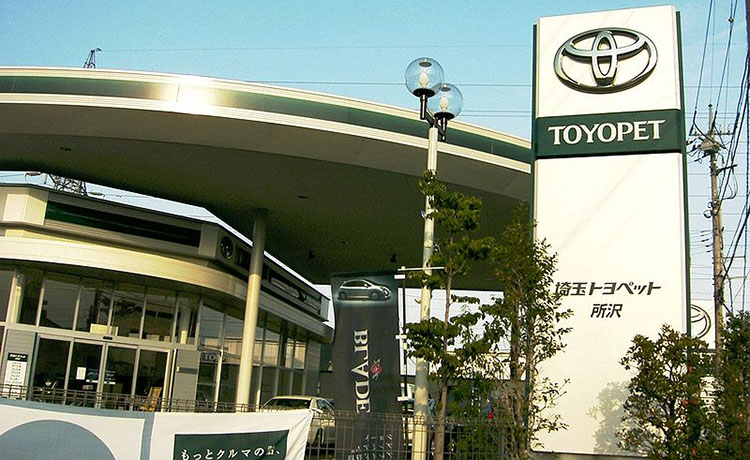 Logo and branding of Toyota

In 1936, Toyota entered the passenger car market with its Model AA and held a competition to establish a new logo emphasizing speed for its new product line. After receiving 27,000 entries, one was selected that additionally resulted in a change of its moniker to "Toyota" from the family name "Toyoda". The new name was believed to sound better, and its eight-stroke count in the Japanese language was associated with wealth and good fortune. The original logo no longer is found on its vehicles, but remains the corporate emblem used in Japan.

Still, no guidelines existed for the use of the brand name, "TOYOTA", which was used throughout most of the world, which led to inconsistencies in its worldwide marketing campaigns.
To remedy this, Toyota introduced a new worldwide logo in October 1989 to commemorate the 50th year of the company, and to differentiate it from the newly released luxury Lexus brand. The logo made its debut on the 1989 Toyota Celsior and quickly gained worldwide recognition.
The three ovals in the new logo combine to form the letter "T", which stands for Toyota. The overlapping of the two perpendicular ovals inside the larger oval represent the mutually beneficial relationship and trust between the customer and the company, while the larger oval surrounding both of these inner ovals represents the "global expansion of Toyota's technology and unlimited potential for the future."
The new logo started appearing on all printed material, advertisements, dealer signage, and the vehicles themselves in 1990.

Japan
In Japan, Toyota currently maintains separate dealership sales channels, called "Toyota Store" (トヨタ店) that were established in 1949, which sell large luxury sedans such as the Toyota Century, and the Toyota Crown, and "Toyopet Store" (トヨペット店), that was originally established to sell the Toyota Corona and the Toyopet Toyoace truck in 1956.(Toyota's five channel dealerships in Japan chronology in Japanese) Toyota also established a commercial dealership called Toyota Diesel Shop (トヨタディーゼル店) from 1957 until 1988, that sold various commercial platform trucks, buses, and forklifts, such as the Toyota Dyna and the Toyota Coaster. Hino products were sold at specific Hino locations, and shared at Toyota Diesel Store locations after Toyota acquired the company in 1967. Starting in 1980, the Diesel Shop also sold the Starlet, Corolla, Corona, Vista and Crown installed with diesel engines. When the Toyota Diesel Store was disbanded, commercial products were divided between Toyota Store and Toyopet Store locations.[61]
Currently, the "Toyota Corolla Store" (トヨタカローラ店) was renamed from the "Toyota Public Store" (トヨタパブリカ店), which was established to sell the Toyota Publica in 1961, then renamed to sell the Toyota Corolla in 1966.
In 1980, the "Toyota Vista Store" replaced the "Toyota Auto Store" (トヨタオート店) sales network that sold the Corolla companion, called the Toyota Sprinter established in 1966. Toyota Vista was replaced by a Lexus sales network in 2004. Some former Vista models were rebranded as Lexus (レクサス), such as the Altezza and the Aristo. Others have been taken over by the "Toyota Netz Store" (ネッツ店), established in August 1998, which was already selling, among others, the Toyota ist and the Toyota RAV4. "Netz" is an acronym for Network of Energetic Teams for Zenith.
Netz locations are being repositioned to resemble the North American Toyota network, called Scion, and are currently exclusive for the Toyota 86. Most models were exclusive to particular retail chains, while some models, like the Prius, are available at all sales channels. These models are available at retail channels nationally, as retail chains in Tokyo and Osaka are different.