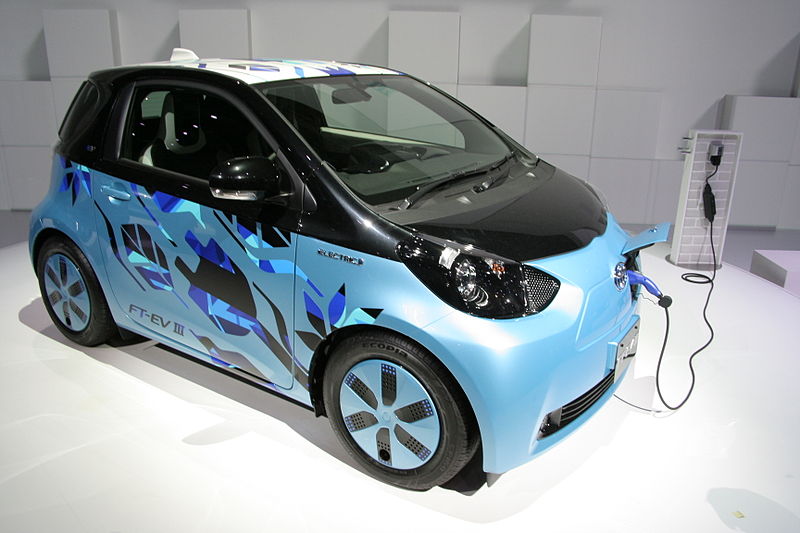 The first generation Toyota RAV4 EV was leased in the United States from 1997 to 2003, and at the lessees' request, many units were sold after the vehicle was discontinued.[105] A total of 1,484 were leased and/or sold in California to meet the state’s CARB mandate for Zero-emissions vehicle. As of mid 2012, there were almost 500 units still in use.

In May 2010, Toyota launched a collaboration with Tesla Motors to create electric vehicles. Toyota agreed to purchase US$50 million of Tesla common stock subsequent to the closing of Tesla's planned initial public offering. Toyota, with the assistance of Tesla, built 35 converted RAV4s (Phase Zero vehicles) for a demonstration and evaluation program that ran through 2011. The lithium metal-oxide battery and other power train components were supplied by Tesla Motors.

The second generation Toyota RAV4 EV was released in September 2012. The RAV4 EV is assembled at Toyota's facility in Woodstock, Ontario along with the regular gasoline version. Tesla is building the electric powertrain at its plant at Tesla Factory in Fremont, California, and then ship them to Canada. The RAV4 EV is sold only in California, beginning with the San Francisco Bay Area, Los Angeles/Orange County and San Diego. Production will be limited to 2,600 during the first three years. As of 31 October 2012, a total of 108 RAV4 EVs have been sold.

A prototype of the Toyota iQ EV (Scion iQ EV in the US) was exhibited at the 2011 Geneva Motor Show. The Scion iQ EV is the successor to the FT-EV II as an electric vehicle based on the Toyota iQ chassis.[117][118] Toyota produced three generations of FT-EV concept cars, and the iQ EV is a production version of those concepts, incorporating the technological and design strengths of all three models. The exterior of the production version is based on the FT-EV III concept shown at the 2011 Tokyo Motor Show.

The U.S. launch of the Scion iQ EV was announced for 2012,[120][121] and according to Toyota, for the initial roll-out the iQ EV would not be available to individual consumers, instead the carmaker decided to focus on fleet customers and car sharing programs. The iQ EV was scheduled to be produced at Toyota’s Takaoka Plant in Toyota City beginning in August 2012 and the initial production was planned to be limited to 600 units, with 400 staying in Japan, 100 units destined to the U.S. and the other 100 for Europe. In September 2012 Toyota announced that due to customers' concerns about range and charging time, the production of the Scion iQ (Toyota eQ in Japan) will be limited to about 100 units for special fleet use in Japan and the U.S. only. The iQ EV/eQ is scheduled to be released in both countries in December 2012.

In addition, Toyota announced that is backing away from fully electric vehicles. The company's vice chairman, Takeshi Uchiyamada, said "The current capabilities of electric vehicles do not meet society’s needs, whether it may be the distance the cars can run, or the costs, or how it takes a long time to charge." Toyota's emphasis would be re-focused on the hybrid concept, and 21 new hybrid gas-electric models scheduled to be on the market by 2015.