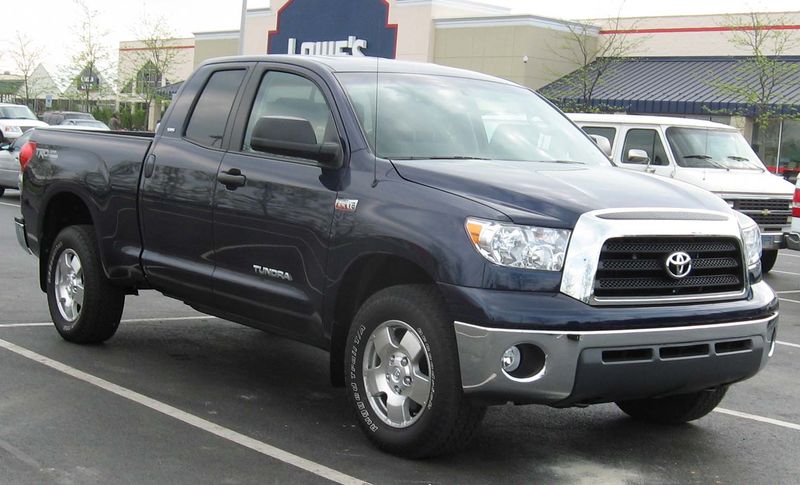 Toyota first entered the pickup truck market in 1947 with the SB that was only sold in Japan and limited Asian markets. It was followed in 1954 by the RK (renamed in 1959 as the Stout) and in 1968 by the compact Hilux. With continued refinement, the Hilux (simply known as the Pickup in some markets) became famous for being extremely durable and reliable, and many of these trucks from as early as the late 1970s are still on the road today, some with over 300,000 miles. Extended and crew cab versions of these small haulers would eventually be added, and Toyota continues to produce them today under various names depending on the market.

Riding on the success of the compact pickups in the US, Toyota decided to attempt to enter the traditionally domestic-dominated full-size pickup market, introducing the T100 for the 1993 US model year, with production ending in 1998. While having a bed at the traditional full-size length of 8 feet, the suspension and engine characteristics were still similar to that of a compact pickup. It proved to be as economical and reliable as any typical Toyota pickup, but sales never became what Toyota brass had hoped for. It was criticized as being too small to appeal to the traditional American full-size pickup buyer. Another popular full-size truck essential, a V8 engine, was never available. Additionally, the truck was at first only available as a regular cab, though Toyota addressed this shortcoming and added the Xtracab version in mid-1995.

In 1999 for the 2000 model year, Toyota replaced the T100 with the larger Tundra. The Tundra addressed criticisms that the T100 did not have the look and feel of a legitimate American-style full-size pickup. It also added the V8 engine that the T100 was criticized for not having. However, the Tundra still came up short in towing capacity as well as still feeling slightly carlike. These concerns were addressed with an even larger 2007 redesign. A stronger V6 and a second V8 engine among other things were added to the option list. As of early 2010, the Tundra has captured 16 percent of the full-size half-ton market in the US.[citation needed] The all-new Tundra was assembled in San Antonio, Texas, US. Toyota assembled around 150,000 Standard and Double Cabs, and only 70,000 Crew Max's in 2007. The smaller Tacoma (which traces its roots back to the original Hilux) was also produced at the company's San Antonio facility.
Outside the United States, Toyota produced the Hilux in Standard and Double Cab, gasoline and diesel engine, 2WD and 4WD versions. The BBC's Top Gear TV show featured two episodes of a Hilux that was deemed "virtually indestructible".