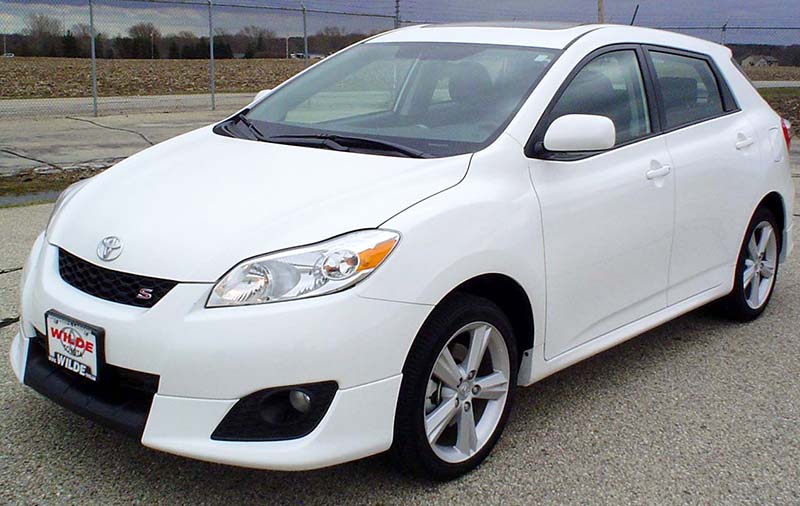 The Toyota Matrix, sometimes officially referred to as the Toyota Corolla Matrix, is a compact hatchback manufactured by the Toyota Motor Corporation in Canada, to be sold in the United States, Canada, and Mexico. It is considered to be the sporty hatchback counterpart of the North American Corolla and is counted as a variant of it in Toyota's sales figures.

The Matrix is the Toyota version of a joint venture between Toyota and General Motors; the GM version being the Pontiac Vibe, which was assembled by New United Motor Manufacturing, Inc. (NUMMI) in Fremont, California. A third version, also assembled at NUMMI, was sold in Japan from 2002 to early 2004 as the Toyota Voltz. Almost 2000 cars were produced before production ceased.Although the Voltz was sold under the Toyota brand there, the vehicle had the same exterior as the Vibe.

Identical mechanically, and nearly as much internally, the Matrix and Vibe are clothed in different sheetmetal designed by their respective brands. Both vehicles are narrow, yet tall station wagons styled in a quasi-SUV fashion (called a crossover utility vehicle or "CUV" by Toyota) and marketed to a fairly youthful market segment. This type of car is also commonly referred to as a sport wagon. First sold in February 2002, the Matrix saw a minor facelift for the 2005 model year, and was redesigned completely in 2009, following the new tenth generation Corolla.

In May 2008, Toyota issued a recall for 2003 and 2004 model year Corollas and Matrixes. The recall notice cites two bolts in each of the front doors as potentially causing the window to come off the track and break. This recall only applies to models equipped with power windows. General Motors issued a recall for the same problem on 2003 and 2004 Pontiac Vibes with power windows at the same time.

On August 26, 2010, Toyota issued a recall for 2005 to 2008 model year Corollas and Matrixes, equipped with the 1ZZ-FE engine and two-wheel drive. The recall notices states that an improperly manufactured Engine Control Module (ECM) can develop a crack in its circuitry, potentially causing the "Check Engine" light to illuminate, harsh shifting, and stalling and/or failure of the engine to start.

The 2009 to 2010 model year Toyota Matrix (and its Pontiac Vibe relative) are subject to the 2009–2011 Toyota vehicle recalls regarding floor mat and accelerator pedal replacement.

On October 10, 2012, Toyota issued a recall for 2009 model year Corolla and Matrix, along with 10 other models. The recall notices states that improperly lubricated driver's side power window master switch may develop a “notchy” or sticky feel, and that improper aftermarket lubrication may present a fire hazard. The repair involves lubricating the switch assembly with a special fluorine grease.