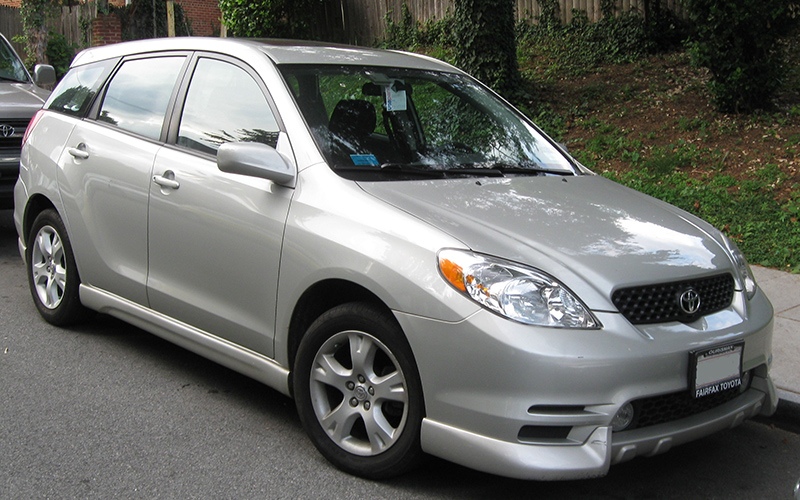 The Matrix was first introduced in the 2003 model year and based on the Toyota Corolla platform.Relatively unchanged in 2004, a facelift for 2005 brought minor revisions to the exterior – mainly revised styling to the front fascia due to complaints of rubbing the ground on the previous incarnation and replacing the red lenses on the taillamps with clear ones.[6][7] Also, the center instrument panel was slightly redesigned and featured a Toyota head unit in place of the previous GM-sourced radio.

In late 2006, Toyota discontinued use of the 2ZZ-GE engine and dropped the XRS from the Matrix lineup to be temporarily replaced by the M-Theory edition. Like each year of the XRS model, the M-Theory was a limited production run of 2500 cars. All wheel drive was also available from 2003–2006 when coupled to the 1ZZ engine and automatic transmission, but was dropped at the same time as the XRS.

Starting out at US$14,670 in 2003, the no-frills base model came with few options. While it did have standard air conditioning, it left out features like color-keyed mirrors and door handles, blacked out window frames, and power windows, locks, and mirrors. Alloy wheels, a body kit, and rear window wiper were also stricken from the options list by Toyota, forcing buyers to go with an XR or XRS model if they wished to have these features, as well as six-way adjustable seats and variable intermittent windshield wipers[citation needed]. However, one option the base model could be had with was AWD for an additional $1,465 (although the actual increase was $2,445, since AWD only came with an automatic transmission). Adding AWD brought the car's curb weight of 2,679 lb (1,215 kg) up to 2,943 lb (1,335 kg) and decreased power by 7 hp (5 kW) and 7 lb·ft (9 N·m). In 2004, the price of a base model remained unchanged, but by the last year of production, 2008, it had risen to $15,510.

The Matrix's mid-grade trim level, the XR was designed to combine the cheapness of the base model with the looks and features of the XRS. By checking this option on the order sheet, customers received standard features like color-matched mirrors and door handles, a leather-wrapped steering wheel, and a panic button on the key fob. Options now available included a sunroof, body kit, and 16-inch (410 mm) alloy wheels. A 2003 XR started at US$16,180 and 2,701 lb (1,225 kg), but when equipped with AWD cost at least $18,445 (only $305 less than an XRS) and weighed in at 2,965 lb (1,345 kg). Like the base model, the XR's AWD engine was detuned. Again, the car's price for its sophomore year stayed the same, but in the four years after that, it rose to $16,990.

For US$18,750, the top-of-the-line model came standard with four-wheel disc brakes and six speakers. Also included on all XRSes were anti-lock brakes with Electronic Brakeforce Distribution, 16-inch alloy wheels, and cruise control. In 2003, 17-inch wheels could be had, but only on cars without a sunroof. An option combining 17-inch (430 mm) wheels and a sunroof became available the second year of production. In 2005, an XRS started out at $18,850, and for its last year, it went for at least $19,250.

The pièce de résistance, however, was Toyota's high-tech 2ZZ-GE engine – the Matrix's namesake because of the metal matrix composite (MMC) used to line the cylinder walls. Displacing 1,796 cc (1.796 L; 109.6 cu in), or 109.6 cubic inches, it produced 180 hp (134 kW) and 130 lb·ft (176 N·m) – a rare 100 horsepower-per-liter. While its 11.5:1 compression ratio was a large factor in its performance, what set the engine apart was its ability to alter timing and valve lift through Toyota's VVTL-i. Because it could manipulate its valvetrain, the 2ZZ was capable of reaching 8500 rpm. Despite the technology, however, the engine's high compression necessitates "premium" gasoline (91 octane or above in the (R+M)/2 scale). With the exception of an available automatic in 2003, a six-speed manual transmission has been the only option for the XRS.[5] A Transitional Low Emission Vehicle (TLEV) its first year of production, the 2ZZ was retrofitted in 2004 with a smog pump and reclassified as an Ultra Low Emission Vehicle (ULEV).

Not a trim level, the M-Theory edition was a 2007-only appearance package with an exclusive "Speedway Blue" color. For US$1,500, a customer got 17-inch Caldina wheels, a chrome exhaust tip, a numbered plaque (1 of 2500), four wheel disc brakes, and a spoiler. To improve handling, a "sport tuned suspension" and strut tower brace were included.

One of the Matrix's unique design features is its interior, particularly the rear 60/40 seats and cargo area. Made with rigid plastic backs, the rear seats fold flat, creating a 53.2 cu ft (1.51 m3) cargo area. In a practicality test, Motor Trend was able to haul more cargo in the Matrix than in a Subaru WRX wagon with 61.1 cu ft (1.73 m3) of space. In addition to the eight tie-downs in the back for attaching the included cargo nets and tonneau cover, the seats and rear floor have integrated rails for installing extra tie-downs.

Up front, the passenger seat also folds flat, accommodating long items like surf boards or allowing drivers to use the tray in its back to hold items like a laptop computer. An electronic device can be charged with the 115 volt/100 watt power inverter. The first year of production (2003), the instrument cluster was completely red. However, the next year, Toyota made the numbers white while keeping the rest of the gauges red. When the car was updated in 2005, a digital clock was added to the radio bezel.

In May 2008, Toyota issued a recall for 2003 and 2004 model year Corollas and Matrixes. The recall notice cites two bolts in each of the front doors as potentially causing the window to come off the track and break. This recall only applies to models equipped with power windows. General Motors issued a recall for the same problem on 2003 and 2004 Pontiac Vibes with power windows at the same time.

On August 26, 2010, Toyota issued a recall for 2005 to 2008 model year Corollas and Matrixes, equipped with the 1ZZ-FE engine and two-wheel drive. The recall notices states that an improperly manufactured Engine Control Module (ECM) can develop a crack in its circuitry, potentially causing the "Check Engine" light to illuminate, harsh shifting, and stalling and/or failure of the engine to start.